A TRUSTED VOICE IN OUR COMMUNITY

Rod Hall is a trusted voice in our community. He has a proven track record of responsibly managing vital transportation initiatives and advocating for better communities, a strong economy, and healthy children and families through legislation. These tenets are deeply rooted in his desire to serve others by advancing commonsense policy solutions and an ability to build consensus. With more than two decades of government and private sector experience, he will leverage his policy experience and civility as a fresh voice fighting for you in Richmond.

Rod currently serves as a policy advisor in the Washington office of K&L Gates LLP. His practice focuses on transportation and infrastructure issues. He advises an array of corporate, minority and women-owned business enterprises and municipal authorities on legislative and regulatory matters. These collaborations help drive innovative solutions to critical transportation policy challenges that negatively impact the economy and stifle job creation.

Prior to joining K&L Gates, Rod was appointed by President Barack Obama on August 17, 2009, to head the Federal Aviation Administration (FAA) Office of Legislative Affairs. He served as the principal advisor to two FAA administrators on matters concerning Congress and the aviation industry. Rod also served two U.S. secretaries of transportation – one a Republican, the other a Democrat. For more than five years, Rod worked in a bipartisan manner with Congress on legislation to secure funding and policies vital to improving safety for the flying public, strengthening meaningful consumer protections and increasing diversity within the aviation workforce.

Prior to his service in the Obama administration, Rod served as a senior congressional staffer to U.S. Representative Eddie Bernice Johnson (D-TX), chair of the House Science Committee and former chair of the Congressional Black Caucus. He was a principal advisor on issues related to aviation, highways, mass transit, clean air and water resources policy. He was responsible for drafting legislation that removed and eliminated hazardous air pollutant emissions that were impacting underserved communities. He immersed himself in those challenges that were in desperate need of new solutions. To that end, he helped various district constituencies secure vital funding for aviation, mass transit, highways, bridges and flood control. He drafted legislation focused on clean and smart water strategies to improve the quality of life for district constituents.

Immediately prior to entering public service, Rod worked in the accounting and corporate finance practices of Ernst & Young LLP.

Rod has a long history of service and leadership within the Prince William County community. In 2015, Governor Terence R. McAuliffe appointed him to the Virginia Aviation Board. In 2016, he assumed the position of chairman. That same year, Rod was elected to serve as a delegate to the Democratic National Convention in Philadelphia. In 2018, Rod was tapped by Governor-elect Ralph S. Northam to serve as a member of the Policy Council on Transportation. In 2020, he was appointed by Governor Northam to serve as a member of the Virginia Passenger Rail Authority. He was also selected by the Prince William County Board of Supervisors to serve on the Stafford Regional Airport Authority. 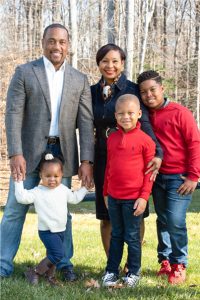 Rod and his wife, Lena, are the proud parents of three children, Pierce, Carter, and Peyton, who attend public school in Prince William County. The family attends church at First Mt. Zion Baptist Church in Dumfries.